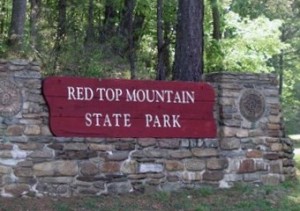 Just because the goofballs in Washington cannot get along and (hello?) run the dang government, that doesn’t mean we can’t have fun romping and frolicking at Lake Allatoona’s Red Top Mountain State Park.  As a state park — not a federal park — it’s not affected by the shutdown of the United States government.

Georgia State Parks & Historic Sites are not affiliated with the National Park System and will remain open even with the federal government experiencing a shutdown starting October 1, 2013.  These sites are operated by the Georgia Department of Natural Resources.  The only affected park is S.C. Foster State Park, located inside the Okefenokee National Wildlife Refuge.  While this park’s campground and cabins remain open, visitors can not boat into the swamp or hike nature trails.

“We’ve already had a number of campers check into our state parks because they had to leave Corps of Engineers campgrounds which had closed,” said State Parks Assistant Director Wally Woods.  “We have plenty of cabins, yurts and campsites available this week.”

Many Georgia State Parks are located on Corps of Engineers lakes, including Don Carter on Lake Lanier, Red Top Mountain on Lake Allatoona, Mistletoe on Clarks Hill Lake, and Tugaloo on Lake Hartwell.

Additional examples of sites not affected by the federal shutdown include:

October is just the beginning of the fall foliage season, which is a very busy time for many state parks. Typically, northern Georgia peaks in late October; however, color can be seen as late as mid-November. Some parks in southern Georgia put on a pretty display during late autumn as well, particularly those with cypress trees and tea-colored lakes such as George L. Smith State Park. Whether hiking around a lake or simply driving country roads, travelers can check Leaf Watch 2013 for expert advice on leaf watching.

Waterfalls and lakes, salt marsh and mountains are just some of the beautiful environments of the 48 state parks and 15 historic sites. Most state parks offer fishing, boating, hiking, camping, golf, geocaching, birding and more.  Accommodations include campsites, cabins, lodges, even yurts, and vary by park.  Among the historic sites are presidential homes, ancient Indian mounds, battlefields, plantations and even a gold museum.  Georgia State Parks are affordable destinations for quick getaways, and many offer two-day, two-night overnight packages such as golf at the consistently highly rated Arrowhead Pointe Golf Course at Richard B. Russell State Park in Elberton.

From October 1 through December 1, the Reelin In The Prizes fishing tournament is underway in more than 38 parks across the state.  A wide range of fishing environments include warm water streams and rivers, small and large lakes, reservoirs, even salt water fishing.  Contestants have a chance to win several prizes, including a Big Green Egg Grill.

For information visit GaStateParks.org/thingstoknow or connect with us at https://www.facebook.com/georgiastateparks.