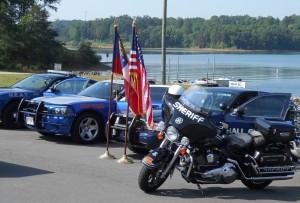 The Fourth of July is when a lot of amateurs get busted for Driving Under the Influence (DUI). ~~ Photograph by Robert Sutherland

The July 4th Holiday Weekend is like the amateur hour for folks who Drive Under the Influence (DUI).

Neighbors, co-workers, teachers, family and friends visit other nice folks for BBQ and “a couple of beers.”

Everybody’s happy.  No one is looking for trouble.  They might only be a few miles from home.  It’s hot.  The kids are tired.  They drive away … impaired.

And their world changes with they’re busted by law enforcement for DUI.

Some drivers lose their jobs.  Some go to jail.  All pay fines and/or lawyers and court fees that cost many thousands of dollars.  They’ll have to win the lottery to afford car insurance for the next billion years.  All for a couple of beers at a BBQ and one bad choice to drive away under the influence.

Commissioner of the Georgia Department of Public Safety Colonel Mark W. McDonough, said troopers will be working with local officers and deputies in their areas for concentrated patrols and roadchecks to remove impaired drivers from the roads during the first wave of OZT that includes the 102-hour July Fourth holiday travel period, ending on Sunday July 7.

“Troopers and officers will not hesitate to arrest an impaired driver and tow their vehicle,” said Colonel McDonough.

The Georgia State Patrol encourages you not to drive if you plan to consume alcoholic beverages.  Choose a designated driver before the celebration begins.  “If you see a driver that you suspect is impaired, notify law enforcement,” he added.

From July 4-7, the Georgia State Patrol will also be participating in the nationwide traffic safety initiative, Operation C.A.R.E, or Combined Accident Reduction Effort.  State troopers will join other state highway patrols and state police agencies from the United States and Canada in conducting high visibility patrols and providing safety education to the motoring public in an effort to reduce the number of traffic deaths on our roads.