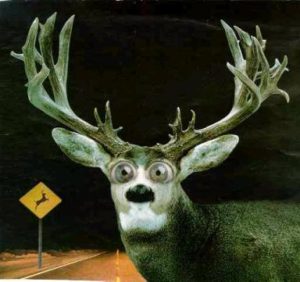 Georgia’s Department of Natural Resources’ Wildlife Resources Division estimates there are 50,000 deer-car collisions each year in the state.  Some wrecks are unavoidable, but these tips will lessen your chances of meeting Bambi on a dark lonely highway.

“Deer are on the move during this time of year and while motorists in rural areas may expect to see deer, Georgia’s suburban and urban areas can be prime spots as well,” said Don McGowan, a senior biologist with DNR’s Wildlife Resources Division. “Hunting is often mistakenly blamed for increased deer-car collisions, but there actually are natural explanations for increased deer activity.”

Deer are closer to the highways during autumn for two primary reasons:

These five tips will to help drivers avoid collisions: