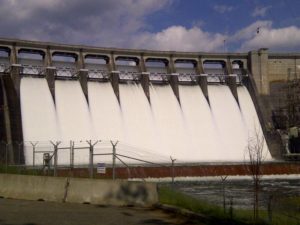 The floodgates of fun are open at Lake Allatoona!

There’s good news out of Washington … for a change.The morons we elected to run the United States government waited until the last possible moment to fund America — temporarily — and allow federal agencies and services to reopen, including national parks.

We’ll spare you all the details of the brinksmanship, in the fear it will drive you as mad as the stenographer who was forced to immerse herself in the insanity for weeks.

Hundreds of thousands of federal workers will begin returning to their jobs today, after what appears to be a 16-day paid vacation.

We agree with the sentiments of Republican Senator John McCain, “It is one of the most shameful chapters I have seen in the years I’ve spent in the Senate.”

At least we can get back outdoors, away from the incessant droning of bombastic media, and cleanse our bodies, minds and souls in the beauty of Lake Allatoona.

There’s still time for Republicans and Democrats to pave paradise, put up a parking lot and charge us for visiting places once known as “parks.”