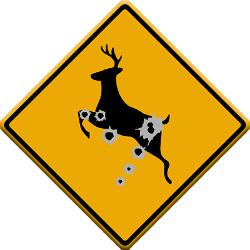 Georgia’s laws pertaining to deer hunting will change a bit on Sunday, December 1, 2013, for the 300,000 hunters who pursue the state’s most popular game animal: the white-tailed deer, many of whom hunt near Lake Allatoona.

A new regulation has changed the number of available days to take deer of either sex, depending on the type of equipment used and the area of your hunt.

During the period of December 1-25, 2013, hunters should make special note of the following regulations:

Why were the number of firearms either-sex days reduced?

A few factors went into this decision, including the decline in the number of fawns that survive into fall and an increase in doe harvest rates.  These factors warranted regulatory changes to reduce the doe harvest.

Georgia offers more than 90 state-operated wildlife management areas (WMAs) for the public’s use.  State-managed public hunting lands are funded through a combination of state license fees and matching federal funds from the U.S. Fish & Wildlife Services’ Wildlife Restoration Program.  Hunters account for $977 million in retail sales in Georgia each year with a $1.6 billion ripple effect and almost 24,000 jobs.

Hunters are allowed a season bag limit of 10 antlerless deer and two antlered deer (one of the two antlered deer must have a minimum of four points, one inch or longer, on one side of the antlers).  Special regulations apply to archery-only counties and extended archery season areas.  Counties in the Metro Atlanta area (Clayton, Cobb, DeKalb, Forsyth, Fulton, Gwinnett, and Rockdale counties) offer either-sex archery deer hunting Sept. 14-Jan. 31.

To pursue deer in Georgia, hunters must have a valid hunting license, big game license and a current deer harvest record. If hunting on a WMA, a WMA license is required.

Licenses can be purchased online at www.gohuntgeorgia.com/licenses-permits-passes , by phone at 1-800-366-2661 or at a license agent (list of agents available online).