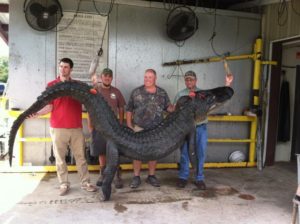 It all started when Jim Overman, age 43, of Bainbridge, GA — whom authorities are calling a “hunter” — went looking for giant alligators in Lake Seminole.  Old Jim might be the nicest guy in Bainbridge, but if you ask me (and you didn’t) that’s nuts.

Now, I don’t want to inflame the liberal media, but that ain’t good fortune or good luck in my book.  Nope.  Not even a little bit.

According to the otherwise non-screwy authorities at the Georgia Department of Natural Resources’ Wildlife Resources Division, the 13-foot, 10-¾-inch gator beats the former record by 1-¾ inches.  The record was previously held by Randy Hand, who harvested his 13-foot, 9-inch gator on Sept. 19, 2010, in Decatur County.

I guess if you’re going to come across a furious gator — in the dark — it might as well be of record size.  If it were me, I’d be scared to death, but I’d make the news.  If this had happened in Lake Allatoona, I wouldn’t go in the water until it was drained and every inch inspected for more gators.

Unconfirmed reports state the gator’s big brother and several rowdy cousins are not happy about what happened to their kin.

A group of hunters spotted the large gator while scouting ducks in the area.  They contacted a local taxidermist to track down a hunter with a 2013 alligator tag.  Jim Overman got the call and the chase was on.

“For those fortunate enough to be selected to participate in our alligator hunting season, it truly is a fantastic experience,” says Dan Forster, director for the Wildlife Resources Division. “It’s extremely exciting to know that a state record alligator was harvested at Lake Seminole, and we extend our congratulations to Mr. Overman. For hunters looking for a thrilling and one-of-a-kind hunting opportunity, I certainly recommend applying for this hunt.”

The American alligator (Alligator mississippiensis) is a conservation success story.  Due to loss of habitat and unregulated market hunting, alligators were reduced to low numbers by the early 1900s.  Thanks to the efforts of conservationists and state wildlife agencies, alligator populations have rebounded and now flourish over most of their historic range.

Yup.  Your tax dollars at work protecting alligators so that they flourish, while the rest of us are working part-time for Wally World — where we’re safe from alligators.  In Georgia, the alligator population is one of many renewable natural resources that can sustain limited harvest in concert with biological monitoring and periodic evaluations.  The population is managed through a regulated hunting season.

For Georgians interested in alligator hunting, we invite you to 1) submit an application for the opportunity to participate in the annual alligator hunting season and 2) seek professional counseling in order to determine if you know that gators ain’t a lick skeered of hunters, even if they have big trucks with UGA decals on them.

The Georgia alligator hunting season is September 7, 2013 through October 6, 2013 for quota permit holders only.