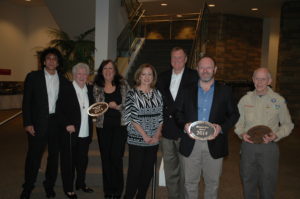 The Historical Society feels that it is important for communities to retain and honor these historic sites, because it gives residents a sense of place, which is critical in maintaining a unique identity in suburban Atlanta.

Constructed around 1940, the Scout Hut was provided by the McCanless families in honor of William (Bill) McCanless, son of Eugene and Hettie McCanless.  Bill was very active in scouting and became Canton’s first known Eagle Scout.  Boy Scout Troop 241 has renovated the Scout Hut, taking care to maintain the historic integrity while making necessary upgrades to keep it functional for an active scout troop.

This Craftsman style home was built in 1923 by Newman and Edna Fackler.  It stayed in the Fackler family until the late 1980s when it was purchased by Quinn and Martha Hendrix.  Martha lived in the home until 2010 and began the renovation that was completed by her son Greg and his wife Katherine.

The Ball Ground City Gym was built as a community project for the Ball Ground School in 1948-49.  The City of Ball Ground purchased the gym when the school closed in 2012, and made extensive repairs to the roof, upgraded the electrical system and refinished the floors.  It has truly become a community center and is being used for over 16 games a week.

This one-story brick building was built prior to 1918 and it was used as a barbershop in the 1930s and 1940s, and as the R&M Hoagie Shop since the 1970s.  Mike Deluca and his family completed a renovation of the building, exposing the old brick walls and original wood floors and removing the dropped ceiling to reveal the original ceiling and skylight.

Volunteers of the Year

The Cherokee County Historical Society is pleased to recognize Karen Smithwick and Jennifer Bagwell as the 2014 Volunteers of the Year.  Karen and her daughter, Jennifer, have volunteered for the Historical Society for over eight years.  They have both served on the Board of Directors and donated hundreds of hours on numerous committees, including those for marketing/membership and the American Girl Tea.  They have both earned our respect and gratitude.