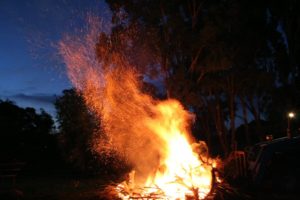 Fires can get out of control quickly.

The annual statewide burn ban, issued by the Georgia Department of Natural Resources, began on May 1, 2014, and will be in effect until September 30th.

These counties are included in the Burn Ban:

During the ban, residents will be unable to burn leaves, tree limbs, forest land or use air curtain destructors for land clearing.  Recreational fires will still be permitted around Lake Allatoona.

The Georgia EPD imposes a ban on outdoor burning to comply with Federal Clean Air Regulations.  During the summer months in Georgia, the ozone in the air we breathe can reach unhealthy levels.  The Georgia EPD has identified open burning as a significant contributor of the pollutants that form ozone.  Consequently, open burning in metro Atlanta and larger counties must be restricted during the summer months.