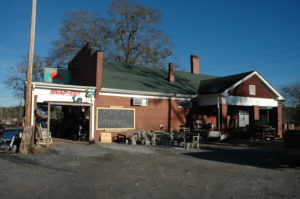 Bell’s Store to be Demolished

The Cherokee County Historical Society (CCHS) tried its best, but was unable to find a solution to save the historic Bell’s Store building in Buffington.  That means the building will be demolished and replaced by a new gas station.

The Historical Society first asked the new owner, Jim Rollins, to try to incorporate the building into the site plan for his gas station, but that didn’t work.

The Historical Society then looked at nearby properties on which to relocate the building. Several property owners came forward with interest in taking the building, but ultimately those options failed due to logistics and the costs involved.

CCHS would like to thank the many people who were involved in trying to save Bell’s Store.  CCHS hopes to unite people in the coming months to look at options to rescue other historic sites in the future.

The Historical Society will photograph and document the interior and exterior of the building prior to demolition.  Fortunately, the history of Bell’s Store has been recorded by the Bell family in the book, Buffington and Macedonia in Days Gone By, by W.F. Bell.

In an effort to preserve remnants of the building, and begin a seed fund for future preservation projects, the Historical Society will receive some of the exterior bricks from the building.

“We would like to use the bricks as a fundraiser to begin an endangered properties preservation fund,” said Executive Director Stefanie Joyner.  “President Jeff Brown came up with the idea as a way to honor the legacy of Bell’s Store, and create some start-up money if we are faced with a similar scenario in the future.”

Individuals wishing to support future preservation efforts may purchase a commemorative brick.  They will be engraved with the donor’s name and placed at a new courtyard at the Historical Society’s Rock Barn.  Volunteers will be needed to clean the bricks and assist with moving them offsite.

The Historical Society feels that the plight of Bell’s Store is going to be repeated in the coming years.  “We’re not against development and progress,” continues Ms. Joyner, “we would just like to see some of Cherokee County’s historic buildings incorporated into new construction, such as the silos in Crabapple.  Including a little bit of history with new developments will only enhance our communities while retaining some of the character that differentiates Cherokee County from other Atlanta suburbs.”

For those interested in purchasing a commemorative brick or assisting with this project, please contact Ms. Joyner at 770.345.3288 or [email protected].