Georgia’s Office of Highway Safety Director Harris Blackwood held a news conference on Friday, May 23, 2014, at the Bethany Bridge Boat Ramp on Lake Allatoona.  He was joined by law enforcement officers from county, state and federal agencies to drive home the message: “Choose Your Ride.”

There were a dozen law enforcement vehicles and a hearse on display to make “Choose Your Ride” clear.  If you break DUI and BUI laws, you will be arrested, unless you kill yourself in an accident first.

Highway and boating deaths can be prevented by following a few common sense rules.  First, of course, is “Don’t Drink and Drive” on the roads or waterways.

The laws in Georgia forbid drinking while operating a motor vehicle on our roadways, but that’s not the case when driving a boat.  Boating Under the Influence (BUI) can sneak up on operators in the heat of the day, however, when the sun can dehydrate boaters and choppy waters can cause disorientation.

The best decision is to designate a competent non-drinker to drive boats, just to be sure.

The “Choose Your Ride” press conference had a sheriff’s car and a hearse to drive home its message. ~~ Photograph by Robert Sutherland

Why take a chance on a ride home in a police car or in a hearse?

Other tips that were shared by speakers included having everyone on board watercraft wearing life preservers — not merely those ages 12 and under, as the law states.

Watch your speed — on freeways, back roads and on Lake Allatoona.  Speed is a factor in many fatal accidents.

There will be “zero tolerance” over the Memorial Day Holiday for those who operate any vehicle under the influence. 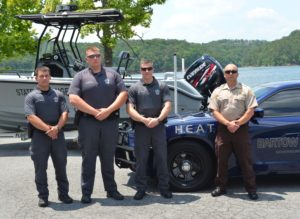 HEAT squads — High Enforcement Arrest Teams — have many ways to tell who’s ripped, stoned, drunk, high, buzzed or whatever you call it.  You will be busted if you’re stopped and you won’t like the consequences.

That was the message of Bartow County Sheriff Clark Millsap.  Sheriff Millsap also said, “It’s cheaper to call a taxi than it is to pay for a DUI [Driving Under the Influence citation].”

If you get caught driving under the influence, your life is going to be a whole lot worse than whatever drove you to drink in the first place.  Don’t be stupid.

Please buckle up, slow down, don’t drink and drive, and fill up on hot dogs, not beer, this holiday weekend.

We don’t want to lose you.

If you drink and drive, you’ll get a free ride from law enforcement in Georgia. ~~ Photograph by Robert Sutherland

DNR Spokeswoman Melissa Cummings who does her job with excellence, courtesy and kindness. ~~ Photograph by Robert Sutherland