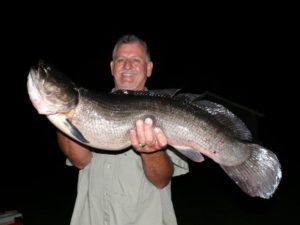 Angler Jimmy Tucker, 55, from Statenville, set a new fishing record while angling on the Suwannee River on 2014’s first day of summer.

According to the Georgia Department of Natural Resources’ Wildlife Resources Division, this 16 lb, 3 oz, 33 1/4”-inch catch beat the existing state record, established in 1976, by three ounces.  A new state record has to be at least one ounce greater.

“Landing a 16-plus pound bowfin is no easy feat, so we are thrilled that Tucker and his fishing buddy – Tyler Carter – were able to get the fish in the boat to claim this new record,” says John Biagi, chief of fisheries for the Wildlife Resources Division.  ”This record comes just weeks after another state record was tied in Georgia waters. If that is not incentive to get outdoors and go fish Georgia, I don’t know what is!”

Bowfin are a relic of an ancient group of fish, and sometimes confused with the exotic and unwanted snakehead fish (not currently found in Georgia).  One of their unique characteristics is the ability to swallow air into its swim bladder to supplement oxygen supplied by the gills.  This allows it to live in waters low in oxygen considered uninhabitable by most other fish.  These fish, while tremendous fighters when hooked, are most often taken by anglers fishing for other species.

The bowfin is yellow to yellow-olive with a darker olive pattern on the back and sides.  They have a flattened head, long body, sharp teeth, and a long dorsal fin.  Males have a large black spot, bordered with orange, located near the tail.  They often are found in sluggish, swampy, vegetated bays of warm lakes and rivers and are known to consume fish, crayfish, frogs and large insects.  Recommended fishing bait includes minnows, worms, nightcrawlers, frogs, crayfish or artificial lures.  Mr. Tucker was using a Mepps spinner when he landed this new state record.

Anglers must possess a current Georgia fishing license to fish in public waters.  Where can you get a license? Buy it online, find a list of retail license vendors at www.georgiawildlife.com/licenses-permits-passes or buy it by phone at 1-800-366-2661.

By purchasing a license as well as fishing equipment and related items, you and your fellow anglers help fund sport fish restoration programs, thanks to the Sport Fish Restoration Act.  This Act allows funds accumulated from a federal excise tax on fishing equipment and related items to be directed to activities that benefit recreational anglers.  A portion of these funds is provided to the Georgia Department of Natural Resources based on several factors, including the number of paid sporting licenses.  Sport Fish funds make the following activities possible: managing sport fish populations, raising freshwater fish in hatcheries and stocking them in public waters, maintaining and operating public fishing areas and building boat ramps, and much more!

Information about state-record fish, including an application and rules, can be found at www.georgiawildlife.com/Fishing/RecordProgram or in the current Sport Fishing Regulations Guidebook.