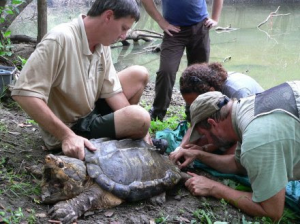 I’m not exactly sure what those conservationists are doing to that alligator snapper (a.k.a. snapping turtle), but I’m sure it’s something that you and I would not want to do.  Judging by the alligator snapper’s eye, it doesn’t look too pleased either.

That hefty potential, combined with relatively easy trapping, made alligator snappers a cheap meat source for soups in the 1960s and ’70s.

The sharp population declines that followed the intense commercial harvest prompted Georgia and other southeastern states to protect this species with the lightning quick jaws and life spans exceeding 100 years.  However, questions remained; namely, what long-term affects did the harvest have?

For answers, the Nongame Conservation Section began a capture-mark-recapture study of alligator snapping turtles in southwest Georgia’s Spring Creek in 1997.  Previous survey results suggested the stream near Colquitt had one of the state’s largest populations. The new study focused on documenting demographics that also could be used to gauge recovery in other harvested populations.  That study ended this summer.

Using baited hoop traps, SCUBA gear and snorkels, researchers logged 163 captures of 71 different turtles in a 2.5-mile stretch of Spring Creek.  Nongame Conservation and Auburn University are analyzing data to examine population size and characteristics such as sex ratios, growth rates and longevity.  Findings will be used to guide conservation of alligator snappers, in Spring Creek and across the species’ range.

The growth of alligator snapping turtles caught twice or more in the Spring Creek study suggests that males can reach at least 104 years old! While such longevity had been assumed, the findings may be the first documentation that the species can top 100.

Researchers used the growth rates of recaptured turtles to create growth curve models estimating longevity. According to the curves, some of the Spring Creek snappers caught were chelydridae centenarians.

Before you pop the kids in the car to go hang out with some olde-tyme alligator snappers, you might want to watch a couple of videos and head out for a happy meal closer to home.