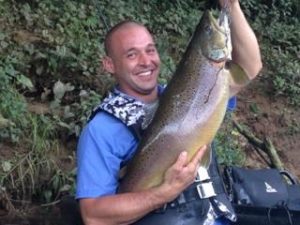 The giant brown trout that most of us have hooked in the Chattahoochee River below Buford Dam but never landed has been caught and it’s bigger than the biggest liar among us could have imagined.

The largest brown trout ever officially caught in Georgia … beating the previous record by 2-1/2 pounds … was pulled in on Sunday, July 27, 2014, by Chad Doughty, 27, from Winder.

The man who did what the rest of us could not do spent 45 minutes fighting our fish from a kayak before he abandoned his vessel and ran the fish down after the giant brown trout ran the line off his reel.

Chad hooked the lunker on six-pound line.  Just to make other anglers even more crazy, this monster was Chad’s first fish of the day.

After Mr. Doughty got the fish that the rest of us almost bagged, he wanted to keep fishing.  His fishing buddies convinced him that he might have a new state record.  So, off they went to seek scales certified by the Georgia Department of Agriculture — often found in marinas, grocery stores and at Georgia DNR Fisheries Offices.

Chief of Fisheries for the Wildlife Resources Division John Biagi says, “Congratulations to Mr. Doughty!  What a tremendous catch and it just goes to show you never know what a day of fishing will get you until you get out on the water.  That is two new state records and one record tied this summer.  What are you waiting for folks?  Get outdoors and go fish Georgia!”

The brown trout is golden brown to olive brown with yellowish sides.  Its back and sides have dark spots encircled with light yellow or white.  Some brown trout also have orange or red spots on their sides.  You can catch good numbers of browns on small lures and flies, but for the big ones it is best to use larger lures or streamers.

Research by DNR biologists show that brown trout in the Chattahoochee grow rapidly after they become large enough to eat other fish. The big ones are usually found in deep holes near rocks or downed trees. Use 6-10 pound test monofilament on spinning gear or 3-5x tippet on fly rods.

Anglers must possess a current Georgia fishing license to fish in public waters.  To fish for trout you will also need a trout license.