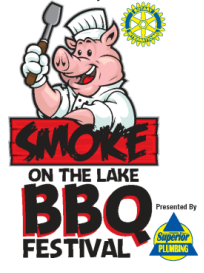 Smoke on the Lake BBQ Festival takes place the weekend of May 9th at Cauble Park in Acworth, GA.

For a few bucks you can taste your way through some of the best BBQ in Georgia (and beyond) at the Smoke on the Lake BBQ Festival to be held Friday, May 8 and Saturday, May 9, 2015 at Cauble Park.  Friday is special.  There will be an outdoor movie and (ready?) the Lord of the Wings competition.

BBQ teams and festivals come up with the most clever puns, although no one is ever the butt of anyone’s jokes.  The Smoke on Lake BBQ Festival wins the prize for the Lord of the Wings.

The 6th Annual Smoke on the Lake BBQ Festival is presented by Superior Plumbing.  The North Cobb Rotary Club, City of Acworth, and the Georgia Barbecue Association hope you’ll stop by for a little pickin’ and grinnin’.

All proceeds will be distributed among several local charities.  Where else can you help good causes by eating fabulous BBQ?  Nowhere.  Nowhere at all.

Help your community and enjoy a tasty day at the 6th Annual Smoke on the Lake BBQ Festival at Cauble Park.  You might even be named Lord of the Wings!

Join us Friday night for a concert under the stars, then again on Saturday for the best BBQ around!

Teams from all over the Southeast will compete in professional and amateur divisions to see who will be in Hog Heaven when they take home the title for 2015.

On Friday night, gates will open at 6:00 p.m. with the Lord of the Wings competition.  Each team will be preparing their own special flavor of chicken wings and you get to be the judge!

At 8:00 p.m. local band The Mustangs will take the stage, followed by a fireworks display at 9:30!

There will be another people’s choice competition where you get to be the judge, and taste different BBQ entries from all of the participating cook teams! For a small fee, you can taste your way through some of the best BBQ in the Southeast

Parking will not be available at the park, so please park downtown and take the free shuttles.

Click Here for Smoke on the Lake & Lord of the Wings