The New Echota Historic Site in Calhoun, Georgia, preserves remnants from one of America’s most egregious eras: The Infamous Trail of Tears.

In 1825, the Cherokee national legislature established a capital called New Echota at the headwaters of the Oostanaula River, in what is now Georgia.  During its brief history, New Echota was the site of an early experiment in national self-government by an Indian tribe.  The Cherokee printed the first Indian language newspaper office at New Echota, for example.

New Echota is a profoundly significant Cherokee Indian site.  Following the signing of a treaty which relinquished Cherokee claims to lands east of the Mississippi River, the tribe was assembled here for removal to the West on the brutal, deadly trek known forevermore as the Trail of Tears.

The Trail of Tears — From the Perspective of the Cherokee Indians 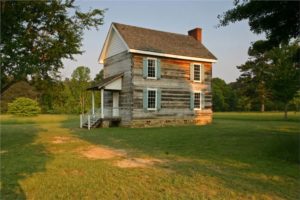 At the visitor center, historians have assembled fascinating interpretive exhibits.  Take time to watch the insightful 17-minute film that offers an unforgettable display of this site’s enormous value.

They’re open Wednesday through Saturday from 9 AM until 5 PM.   As with other state parks, this site is closed on Thanksgiving, Christmas and New Year’s Day.