The history of Lake Allatoona began before it was first authorized by the United States Congress and signed into law by President Franklin D. Roosevelt through the Flood Control Act of 1941, and updated later with the Flood Control Act of 1946.  Obviously, flood control was one of the primary goals of the project that created the lake officially known as “Allatoona Lake.”

Although construction was authorized in August of 1941, the project was shelved until the end of WWII.  In 1946, after a delay of five years, work began with fervor.

The mighty Allatoona Dam was set in place on the Etowah River.  Unfortunately, the town of Allatoona was flooded, along with many farms, homes and businesses, when the land behind the dam turned into Allatoona Lake. 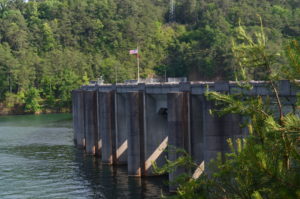 During the 1980s there was a prolonged drought in our region.  During the peak of the drought in 1986, tree stumps, old roads, and foundations of houses were clearly visible above the water line.

The history of Lake Allatoona has provided one especially huge benefit.  Authorities say Allatoona Dam has prevented nearly $80 million in flood damages since 1950.   In 1998, Lake Allatoona counted more visitor hours than any of the other 450 Corps of Engineers projects in the United States.

To most of Lake Allatoona’s six million annual visitors, recreation is their highest priority.  The lake offers everything you could hope for along its 270 miles of shoreline.  Come and find the most beautiful spots for rest and relaxation, hiking and exciting water sports, and burning burgers in the great outdoors.