According to the Cartersville-Bartow County Convention & Visitors Bureau website:

Due to state budget cuts, George Washington Carver Park was removed from the state park system in 1970, and its operation turned over to Bartow County Government in 1975, becoming known as Bartow Carver Park.

In 2017, the park returned to its original name and was renovated under new management by the Cartersville-Bartow County Convention & Visitors Bureau. 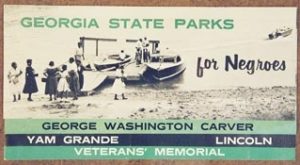 The park has been renovated and is open daily 10 AM-6 PM, unless reserved for private functions.

The beach is open between Memorial Day Weekend and Labor Day.

You are welcome to enjoy all this park offers after purchasing a one-day pass or annual pass.

We are thankful that, today, all Americans are welcome in all our parks.