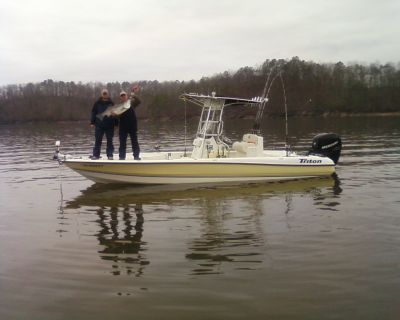 Well today is the first day in over 3 years that I had a client not show up without calling me. I waited at the ramp for over and hour waiting on Samantha and Christi to show up. I called them at lease 20 times but they would not even have the decency to pick the phone up and tell me that they where not coming.

After another 30 minutes off cooling down time I decided that I would go do a little fun fishing. And man am I glad I did. I put in down south and decided to run to mid-lake to start fishing. As I was coming around a point I saw a big school of shad flipping out in open water. I grab my net and threw it dead center on the school. As soon as the net hit the water you could see shad flipping in the net. As I was retrieving the net I felt something big in it. I was thinking Gar or maybe a carp but to my surprise it was a 15 lb Striper.  I threw her back, pick up my bait and put it in my tank and decided to start my day right there. I decided to start out by pulling umbrella rigs. I didn’t have my first rig 50 feet behind the boat before it took off   (To me there is nothing better then having a fish hit a rig as you are letting them out.) it was another Striper in the 4-5 lb range. After a couple of more I decided to head mid-lake and joy the guys that where prefishing for the tournament tomorrow.

I made the turn at red-top and saw 5-6 fish rolling up on top. I threw my rigs out again and with in seconds had a double on ( 11 and 13 lb Striper ).  The action died off quick so the I pull up my rigs and Finally made it up to where all the board members where.

As I was pulling up I saw Allen and his buddy hookup. They told me the fish where biting and welcome me to join them. I didn’t even get my second line in the water before the first one was screaming out the back of the boat. Then the second one took off as I was trying to put it down to get to the first one. After about 5 minute of me running around the boat like a chicken with it’s head cut off I manage to boat two nice 5 lb Hybrids. This went on for another hour and then slowed down. I decided then to do a little trolling to see if I could find the school again. It didn’t take 10 minutes before I had reels screaming out the back of the boat again.  As I was boating my last fish I look over and saw Jrdent of First Bite Guide Service and his son Chris hooked up with a monster. As I got close to their boat Johnny landed the fish. From a distance it looked to be over 30lbs. Johnny and Chris weighed her ( 26 lbs ) and then got her back in the water quickly. I also ran in to Chuck, Fishtracker and Mark and each of their boats where catching fish as well. For me what started out to be a bad day ( Thanks Samantha and Christi ) turn into a pretty good one. I ended the day with 21 fish and only one of them was under 4 pounds….Here are a couple of pictures I took of Johnny and Chris with their 26 lb Striper… Guys I still have a few days open this month give me a call at 770 827-6282 if you would like to get into some of this great action…….