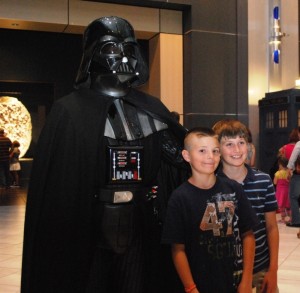 Night at the Museum IV will rock your kids into loving science!

Imagine!  No more pleading with them to study science and math that you and I could not possibly understand.  Ever.

A few fun hours at Tellus might inspire your kids to become scientists and inventors of stuff like the electric spoon!  Don’t miss this opportunity to become as rich and famous as the people who invented Post-It Notes and spam.

Besides, even if your kids think you’re a dork for asking if they want to go to a museum on a Friday night … what kid doesn’t want to enter a costume contest?

Night at the Museum features more than 40 costumed characters, including the Wright Brothers, Marie Curie, Galileo, Dr. Who, characters from Star Wars and Star Trek and more!

Children ages 12 and under are invited to dress up as either a person from science or science fiction.  Awards will be presented in both categories for different age groups.

(No, adults.  This costume contest is for kids.  Only kids.  No, you cannot dress up.  No, not even if you have Spock ears or your own functional Romulan Warbird [unless the cloaking device works].  Sorry.)

Every child gets a free autograph book to collect signatures of some of the biggest names in science and science fiction!