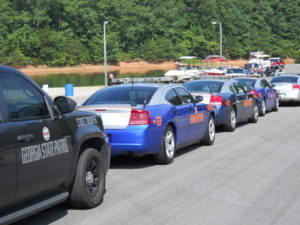 You drink. You drive. You get busted. -- (Photo: Robert Sutherland)

Last year, the GA State Patrol investigated 312 accidents over the Memorial Day Holiday weekend.   There were 13 fatalities; alcohol was a factor in six of them.  In cars and trucks, eight out of nine people killed were not wearing seat belts.

Their goal is to save lives.

Georgia DNR Assistant Chief of Law Enforcement Lt. Col. Jeff Weaver says, “Alcohol, mixed with driving or boating activities, creates dangerous conditions that can lead not only to an arrest, but also to tragedy.”

The marine environment, such as waves, engine noise, water, sun and wind, accelerates impairment and fatigue in recreational boaters. This can quickly become a hazardous situation when such fatigue is combined with the effects of alcohol.  Last year, conservation rangers made 168 boating under the influence arrests on Georgia waterways, and alcohol was a factor in almost 17 percent of boating incidents.

“It is not illegal to have alcohol in an open container on a boat,” says Weaver.  “However, if a person is over the age of 21 and has a blood alcohol content of .10 or higher, they are presumed to be less safe and may be charged with boating under the influence.”

“Operating a boat is as complicated as driving a car, and a boating incident is as dangerous as an automobile accident,” says Ron Fennel, chairman of TEAM Georgia. “However, many people who would never drive a car intoxicated think it is okay to operate their boat after drinking. Operating a boat while intoxicated is illegal and hazardous to themselves and others on the water.”

People arrested for BUI may lose their privilege to operate a boat. These privileges are not reinstated until the successful completion of an approved Driving Under the Influence of Alcohol or Drug Use Risk Reduction Program. The offender will be charged with a misdemeanor, punishable with up to a $1,000 fine and/or up to 12 months in prison.

Colonel Mark McDonough, Commissioner of the Georgia Department of Public Safety, said Georgia State Troopers will again this year be patrolling for impaired drivers near the state’s lakes.  “Past experience has shown that warm weather and outdoor recreational activities can lead to an increase in the number of impaired drivers behind the wheel,” he said.  “The goal of our partnership with the Department of Natural Resources is to keep you safe whether you are on the roads or on the water.”

To help emphasize safe driving and boating, TEAM Georgia will reward those who register as a designated sober operator with a chance to win prizes.

Please be safe on the roads and on the water.