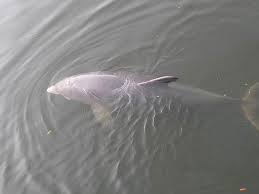 The kind folks who love Lake Allatoona are well known for their appreciation for all types of wildlife.  There aren’t any bottlenose dolphins in the lake, but we thought you might find this story interesting anyway.

The Department of Natural Resources has confirmed that the disease that has killed more than 800 bottlenose dolphins along our mid-Atlantic and southeastern coasts since July 1, 2013 was the cause of death for four dolphins found in Georgia.

Samples taken from the four dolphins found dead at Wassaw and Jekyll islands in November tested positive for dolphin morbillivirus.  The measles-like virus affects the lungs, brain and immune system of marine mammals.  Dolphin morbillivirus, also referred to as DMV, is not infectious to humans.

The confirmation is not surprising.  Dolphins had already tested positive in South Carolina and Florida.

The number of stranded dolphins – those found dead or dying along beaches – has increased in the Southeast this fall.  Morbillivirus follows the seasonal migration of coastal bottlenose dolphins from the upper mid-Atlantic.  A spike in strandings in the mid-Atlantic led NOAA Fisheries to declare an Unusual Mortality Event this summer.

“Unfortunately, there’s nothing we can do to stop the disease from spreading,” George said. “We can only hope that this is part of the natural cycle, and that populations will rebound to healthy levels soon.”

DNR researchers are taking photographs and samples from each stranded dolphin, and conducting necropsies on selected carcasses.  In addition to understanding how the disease spreads, researchers want to know how the disease affects different populations.

Bottlenose dolphins in coastal Georgia are a mix of migratory animals and non-migratory residents.  “So far we’ve seen no evidence that the disease is killing resident dolphins,” George said. “We suspect most of the dead dolphins are coastal migrants.”

DNR and other researchers keep track of resident dolphins by photographing their dorsal fins.  Many dolphins can be identified by the shape of their dorsal fins.   Georgia Marine Mammal Stranding Network partners and NOAA Fisheries have provided significant help with stranding response and logistics.  Tissue samples are being tested at the University of Georgia and the University of California, Davis.

Public reporting is critical for network partners to find stranded dolphins and document impacts of this disease.