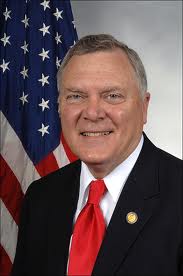 Georgia’s defender in the Water Wars with lesser states, Governor Nathan Deal, responded on Tuesday, August 13, 2013, to a statement by Florida’s Governor Rick Scott saying Florida will sue Georgia in the U.S. Supreme Court over water use.

Gov. Nathan Deal, a prudent and wise man, called the move a frivolous waste of time and money when Georgia has waited more than a year for Florida to respond to its latest settlement proposal.

“Gov. Scott’s threat to sue my state in the U.S. Supreme Court greatly disappoints me after I negotiated in good faith for two years,” Deal said.

“More than a year ago, I offered a framework for a comprehensive agreement. Florida never responded. It’s absurd to waste taxpayers’ money and prolong this process with a court battle when I’ve proposed a workable solution.”

Our Great Leader also said, “Georgia has made significant progress on water conservation and has proposed an agreement that would meet the needs of both states. While the timing seems to work for political purposes, it’s ironic this comes at a time when Florida and Georgia are experiencing historically high rainfall.”

Governor Deal concluded with, “The fastest and best resolution is an agreement, not a lawsuit going into an election year. On the flip side, the merits of Georgia’s arguments have consistently prevailed in federal court, and a victory in the U.S. Supreme Court would decide this issue in Georgia’s favor once and for all.”