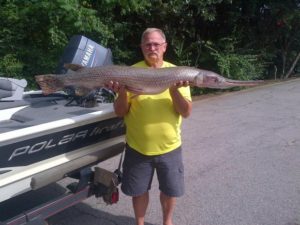 Longnose gar appear to be prehistoric monsters to newbies.  They (the fish) are long, lean critters with mouths that appear to be enormously long and filled with sharp little teeth that would love to take a bite out of you.

The northern portion of Lake Lanier on the Chattahoochee River is full of them — or it has seemed to me when I’ve fished there.

Gar live to be 15-20 years old, probably because sunfish and bass don’t stand a chance in a fight.

How big can they get?

According to the Georgia Department of Natural Resources’ Wildlife Resources Division, Gerald Kennedy, age 62, of Murrayville, GA, caught a state-record gar that weighed 30 pounds, 13 ounces and was just shy of six feet long (58-3/4″).

This lunker beat the old official record by 9 ounces, held by Chad Leonard for his 30 pound, four ounce gar caught on the Alapaha River on September 5, 2008.

“It is so exciting to hear about a state-record catch as it reminds us that Georgia is such a fantastic place for anglers with its numerous fishing opportunities and resources, from big rivers and reservoirs to small neighborhood lakes,” says John Biagi, chief of fisheries for the Wildlife Resources Division.

Congratulations, Gerald!  Now, go back and catch all the little ones.