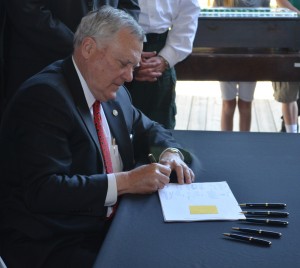 Governor Nathan Deal signed Senate Bill 136 which lowers the legal blood-alcohol limit for boaters and hunters from the former level of .10 to .08.

The new law also increases penalties for those caught boating while intoxicated.  Other provisions in the law will educate the public on boater safety guidelines.

The signing ceremony took place at Holiday Marina at Lake Lanier on a day more fitting for a photo shoot than enacting somber legislation named after youths killed on Lanier in boating accidents.

Governor Deal said, “Far too many tragedies have occurred as a result of boating under the influence and inadequate boater education.  Last June, I vowed to work with the General Assembly to pass legislation in honor of Jake and Griffin Prince, who lost their lives last summer in a tragic accident.  As I have said, if you are too drunk to drive an automobile, you are too drunk to drive a boat.”

The Jake and Griffin Prince Boating Under the Influence (BUI) Law is the portion of the bill that lowers the blood-alcohol content limit to the same level as for Georgia’s automobile drivers.  Previously, Georgia was one of only eight states that allowed a higher blood alcohol limit for boating than for driving.

The portion of the legislation known as the Kile Glover Boat Education Law honors the child who died after he was struck and killed by a jet watercraft last summer on Lanier.  The new statute requires a boater safety education course for all motorized vessel operators born on or after January 1, 1998.  Now, the law requires all youths 13 years old and under to wear life jackets on a moving boat.

“To Tameka Raymond, Kile Glover’s mother, and the members of the Prince family, I want to thank you for your support of these important laws,” added Deal.  “I also want to express my gratitude to Sen. Butch Miller and the other legislators involved in drafting and sponsoring this bill, as well as DNR Commissioner Mark Williams, his staff, law enforcement officials, and anyone else who played a role in ensuring that this bill became law.  I sign this bill for all the Kiles, all the Jakes and all the Griffins in our state.  And, ultimately, I sign this bill for a safer Georgia.”

We express our most heartfelt and sincere condolences to those whose families were so tragically impacted by these accidents.  We pray this new legislation will help save many lives in the years ahead.