If it weren’t for the DNR’s Wildlife Resources Division there would be a lot more “wild life” in Georgia.

DNR Rangers are the ones who nab perps (“bad boys” for those who don’t watch reality TV shows) for shooting wildlife from the comfort of their pickup trucks on public roads, and other beer-induced activities.

Without the DNR Good Guys, Georgia would be more like a Mad Max movie.  Or worse, like Chicago.

The job also requires a good sense of humor when perps tell them they shot a cow because it looked like a bear.  Evidently, not everyone grows up on farms.  Perhaps that would be a good question to ask folks applying for gun licenses?

The Top Cop.  Numero Uno.  Ranger of Rangers.  The Investigative Ranger of the Year has been named.

Representing Pickens County … the Investigative Ranger of the Year … chosen for his determination and devotion to his work — including a complicated case where nine individuals were charged with violations — is: 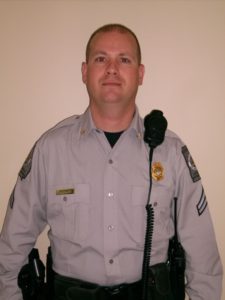 “I commend Cpl. James Keener for his drive and efforts to apprehend these violators whom adversely affect our natural resources,” says Col. Eddie Henderson, chief of law enforcement for Wildlife Resources Division.  “The investigative work required for a case like this can be time-consuming and exhaustive.  This work must be done along with all other duties the ranger carries out daily, so to successfully handle both requires great skill and dedication.”

Cpl. Keener’s investigation involved a poaching case in Pickens County.  The case began with a complaint of spotlighting and shots fired.  Over the next few weeks, Keener gathered information on the first suspect and the numerous additional violators involved.  In total, nine poachers were charged with 53 violations.

Fines for all nine poachers totaled more than $4,800, plus $800 restitution for the death of the cow.  Varying levels of suspension of hunting privileges, community service and probation (dependent on the violations of each individual) were also carried out.

Other conservation rangers nominated for the award for their outstanding investigative work were:

The Georgia Chapter of the Safari Club International sponsors this award.