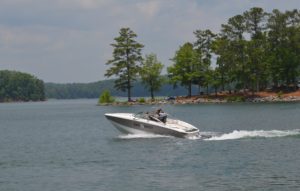 Five people were injured in a boat crash on Lake Allatoona following the fireworks at Allatoona Yacht Club on Saturday, July 5, 2014, according to Public Affairs Officer Mark McKinnon with the Department of Natural Resources Law Enforcement Division in his final Fourth of July Weekend Boating Incident report for 2014.

The last time Independence Day was adjacent to a weekend was in 2011.  At that time 44 Boating Under the Influence (BUI) citations were handed out.  This year’s total BUI count was 36.

Seven BUIs were issued on Lake Lanier and one on Lake Allatoona.

One reason for the drop might be increased visibility of law enforcement on Georgia’s lakes and waterways.  Rangers were out patrolling and educating the public on boating and water safety.  They will be on the water all summer long to inform boaters about the new boater education law.

Unfortunately, there was one drowning statewide.  There was also a serious boating accident on Lake Allatoona.

Around 11:30 PM, immediately after the fireworks at the Allatoona Yacht Club, DNR Law Enforcement responded to a boat crash near the mouth of Illinois Creek in Bartow County.  DNR Rangers were patrolling the fireworks and responded within minutes.

They found a Maxum cabin cruiser with five injured people including a four-month-old child.  DNR immediately transported them to the nearest boat ramp for medical attention.  The injuries were non-life threatening and all parties were taken to Cartersville Medical Center.

The operator of the ski boat, Joseph S. Tofil of Canton, GA, has been arrested and charged with BUI.

The boat crash remains under investigation by Law Enforcement Division Rangers to determine the cause of the incident.

A couple who had been camping on a hammock at the south end of Little Tybee Island came off the island around 9:30 AM on Sunday morning.

boat with a 40 horse power motor struck a sandbar and was grounded.  They eventually freed the boat from the sandbar and were trying to make way again when a wave hit and swamped the boat.  Then, another wave came in and capsized the boat.

The man drowned and the Coast Guard airlifted the woman to the hospital. She had no apparent injuries. The 52-yr-old male was recovered.

We are still in the investigative process so we are not releasing names of the victims.