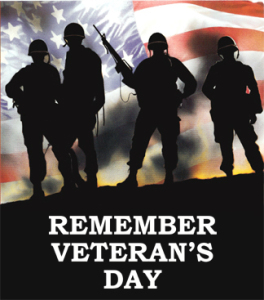 Thanks to all who have served in America’s military!

On behalf of everyone who lives or vacations near Lake Allatoona, we want to say “Happy Veterans Day” to all those who have honorably served the great nation of the United States of America in any of the branches of our military.

We celebrate Veterans Day because freedom isn’t free.  It is won by heroes of every sort.  Without our Vets, you would not have the freedom to worship, your freedom of speech or freedom to live and work where you choose.

The History of Veterans Day

According to the Veterans Administration, World War I — known at the time as “The Great War” — officially ended when the Treaty of Versailles was signed on June 28, 1919, in the Palace of Versailles outside the town of Versailles, France.  However, fighting ceased seven months earlier when an armistice, or temporary cessation of hostilities, between the Allied nations and Germany went into effect on the eleventh hour of the eleventh day of the eleventh month. For that reason, November 11, 1918, is generally regarded as the end of “the war to end all wars.”

Thanks to all who have served in America’s military!

In November 1919, President Wilson proclaimed November 11 as the first commemoration of Armistice Day with the following words: “To us in America, the reflections of Armistice Day will be filled with solemn pride in the heroism of those who died in the country’s service and with gratitude for the victory, both because of the thing from which it has freed us and because of the opportunity it has given America to show her sympathy with peace and justice in the councils of the nations…”

Veterans Day continues to be observed on November 11, regardless of what day of the week on which it falls. The restoration of the observance of Veterans Day to November 11 not only preserves the historical significance of the date, but helps focus attention on the important purpose of Veterans Day: A celebration to honor America’s veterans for their patriotism, love of country, and willingness to serve and sacrifice for the common good.

God bless America, land that I love,
Stand beside her and guide her
Through the night with a light from above.
From the mountains, to the prairies,
To the oceans white with foam,
God bless America,
My home sweet home.

VA.gov says many people confuse Memorial Day and Veterans Day.  Memorial Day is a day for remembering and honoring military personnel who died in the service of their country, particularly those who died in battle or as a result of wounds sustained in battle. While those who died are also remembered, Veterans Day is the day set aside to thank and honor all those who served honorably in the military — in wartime or peacetime.  Veterans Day is largely intended to thank living veterans for their service, to acknowledge that their contributions to our national security are appreciated, and to underscore the fact that all those who served — not only those who died — have sacrificed and done their duty.

Again, we extend our deep gratitude to all those who serve in the military and to their families who share their sacrifice … for the good of America.