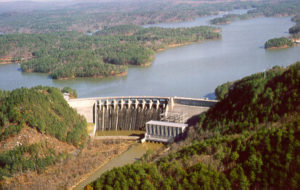 Lisa Parker of the U.S. Army Corps of Engineers (USACE) released a statement on Tuesday, May 20, 2014, regarding the fire that took place in the powerhouse at the Lake Allatoona Dam on the afternoon of Monday, May 19th.

USACE had scheduled a power outage in order to perform repairs to the “switchyard,” according to Public Affairs Officer E. Patrick Robbins.  Robbins said, “When the system was reenergized there was an apparent breaker failure which caused the fire.”

The fire was put out by the Bartow and Cartersville fire departments.  There were no injuries and the dam was not damaged during the fire.  Personnel have been sent to the dam to assess damages.

As a result of the blaze, USACE now says water will be released via the spillway gates at the dam, rather than the generators, to manage lake levels and provide for “downstream environmental purposes” until repairs are made.

Robbins stated “There will be essentially no difference in normal water volumes released.  The difference is that when using the spillway gates it is essentially a 24-hour per day release, rather than the two to six hour peak hydropower releases, but the water quantity is basically the same.”

Phone lines have been temporarily restored to the USACE Project Management Office.