Tellus Science Museum is a very cool place to visit — especially with kids — anytime.  Right now, however, there are three fascinating displays that make Tellus more appealing than ever.

Come and meet a real moon rock, up close and personal!  The astronauts from Apollo 15 brought it back to Earth.  This hunk of the moon is the biggest one in Georgia.  It’s the pride and joy of Tellus’ Apollo exhibit in the Science in Motion Gallery.

The exhibit has tools that would have been used to bring home lunar samples, plus a rocket engine that was test fired by NASA.

You don’t have to go to the moon to view these treasures!  Just take the short drive to Cartersville, GA on I-75 and get off at exit 293. 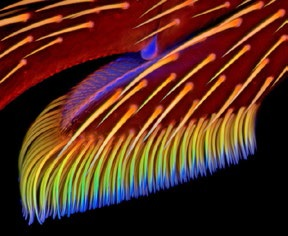 From the Small World Exhibit at Tellus Science Museum

The Nikon Small World exhibit will only be at Tellus until April 6th.  This is your big chance to see large pictures of tiny stuff.

Since 1974, the annual Nikon Small World Competition has recognized the best photographs taken through a microscope.

Scientists from around the world submitted 2000 images to this prestigious contest.  Judges chose the 20 best pictures to be displayed at great American museums, including Tellus.

Last, but not least, is the outstanding display of NASA images in the From Earth to the Solar System exhibit.  This collection reveals the excitement of planetary exploration and our journey to understand the Solar System.  The beautiful and inspiring pictures weave together the themes of astrobiology, planetary science and astronomy.

See this compilation of out-of-this-world images at Tellus, until May 4, 2014.