Fun times on Lake Allatoona often require days of planning and preparation.  Making food in advance, buying ice and drinks on the way, firing up the grill, and gathering the gang when the dinnerbell rings takes time.

It’s also good to plan in advance to avoid the risks of being on Lake Allatoona.  It only takes a moment for things to go terribly wrong … especially if you take the helm of a boat while you’re under the influence of drugs, alcohol or bad company.

As of 9 PM, Sunday, May 25, 2014, two dozen Boating Under the Influence (BUI) arrests were made on waterways in Georgia.  That’s 24 lives that will be hit with higher insurance premiums, fines and other unnecessary expenses — not to mention the danger they posed to themselves and others. 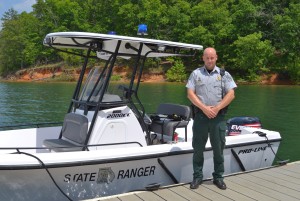 One young man tragically drowned on Allatoona early Sunday morning, May 25th, a few hours after graduating from high school.

We extend our condolences to his family and friends.

DNR Ranger First Class Brooks Varnell kindly took me on a ride-along on Lake Allatoona on Friday, May 24th.

Ranger Varnell is friendly, gracious and dedicated to upholding the law and serving the citizens of Georgia.  No, he is not nice enough to let you play with the siren on his boat or fire torpedoes at crazoids on personal watercraft, but he’s easy to get along with otherwise.

When asked what risks he’d like boaters on Allatoona to avoid, Ranger Varnell said: 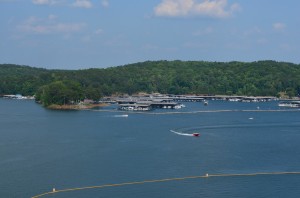 Accidents happen when boats heading in opposite directions come flying around blind corners on the lake. ~~ Photograph by Robert Sutherland

“Cutting corners” on the lake is especially dangerous when boats get as close to the shoreline as possible and meet another boat coming right at them head-on.

There are rules of the road in boating too.  Vessels must stay to the right when rounding points on the lake.

Some dangers are disguised as delights.  Take, for example, the rope swings that risk-takers set up on rocky portions of the shoreline on Allatoona. 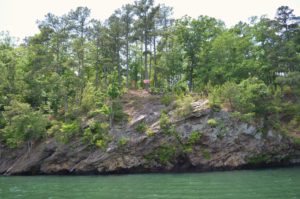 Tarzan is a myth. You can get hurt swinging from vines and/or ropes off cliffs into Lake Allatoona. ~~ Photograph by Robert Sutherland

Ranger Varnell says swinging into the lake looks like fun, but it’s dangerous and could get you a citation from rangers trying to keep folks safe.

Jumping wakes on personal watercraft is fun too.  It’s not illegal either, as long as you are at least 100-feet from other vessels on the lake.

Running a boat as fast as it will go is exhilarating.  There’s no speed limit on Allatoona.  The faster you go, however, the harder it is to maintain control.  As with fast cars and motorcycles, know your limits before you test your vessel’s limits.  Use common sense please.

Rangers patrol the lake to keep the peace. ~~ Photograph by Robert Sutherland

When you see rangers cruising the lake, give them a friendly smile and a wave.  They’re there to protect you and to keep everyone safe.

If you come across Ranger Varnell, don’t bother asking him to let you play with his siren, fire warning shots at passing boats or drop depth charges near fishermen.  Trust me, he’ll say no.

Lake Allatoona is a priceless treasure and a magnificent playground right in our own backyard.  Whether you visit for a picnic, sunbathing, fishing, boating or walking along the shore, please avoid risky behavior. 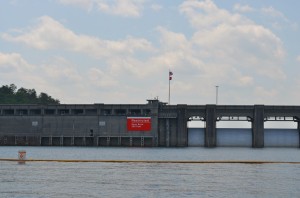 The dam at Lake Allatoona is fascinating but don’t get too close. It’s a long way down on the far side. ~~ Photograph by Robert Sutherland