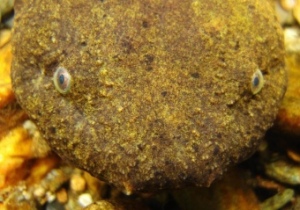 Thanks for your scientific interest in Hellbender Mating Behavior.  This post is about super-secretive, slimy creatures that are camouflaged, live under rocks and only come out at night.

No, we’re not talking about the creepy guys dating your neighbor’s daughter or even your creepy relatives.  We’re talking about Eastern hellbenders.

All of which makes the recent video of a hellbender guarding a “nest rock” even more amazing.

Floyd and Shem were taking advantage of State Wildlife Grants exploring the impact of sedimentation levels on young salamanders, when — Biff! Bop! Bang! — there it was in the bend of a rain-swollen creek on the Chattahoochee National Forest, visible only by snorkelers!!

The head of an adult male hellbender protruding from a gap in the rocks.

The scientists watched, fascinated, as the male defended the site against male and female hellbenders trying to enter.  The male even bit a large female (a stupid blunder by males of any species).  Undeterred, she slipped past him (and probably made him sleep on a sofa rock for a week).

Floyd says the male was a “den master,” a large, dominant male that controls access to a prime nest site.  “We just happened to be at the right place at the right time.  If we had been there just 30 minutes before or after, we would have missed seeing the whole event.”

Such are the serendipitous successes of snorkeling scientists.