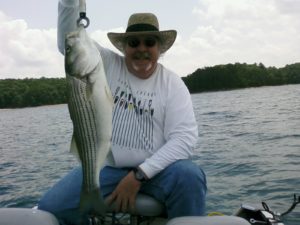 If this guy can catch a nine-pound striper on Lake Lanier, so can your grandmother.

After all the ice and snow, we need two things: new ways to fight cabin fever and new tips for catching striped bass on Lake Allatoona and around Georgia.

Fishermen, and others who are incapable of telling the truth, are reporting lots of action while fishing for stripers.  It might be true, but it’s also possible they haven’t caught a fish in so long that they’re hallucinating or suffering flashbacks to last season.

Striped bass are abundant in many reservoirs across the state thanks to the stocking efforts of the Fisheries Management Section of the Georgia Department of Natural Resources’ Wildlife Resources Division.

Take the Georgia Department of Natural Resources’ Wildlife Resources Division, for example.  They’re saying that “This time of year, it is common to catch five to 15-pounders, with the occasional landing of a 30-pounder or greater.”

Let me ask you a question.  When was the last time it was common for you to land fish like that?

Right.  Never.  But that was then, this is now.  NOW we have tips for catching striped bass around the Great State of Georgia!

Stripers prefer water temperatures less than 75 degrees and tend to concentrate over river channels and around submerged islands where threadfin shad and blueback herring are abundant.

For more consistent results, live bait is recommended – 4 to 6-inch minnows or shad and blueback herring where legal (available at many local bait and tackle shops). Biologists recommend fishing live bait shallow, less than 10 feet, with a large bobber and no weight attached (free-lining), or fishing vertically (down-lining) with a 1-ounce sinker weight at greater depths of 10-30 feet. A size 2-4 hook is recommended for fishing these larger live baits and landing big stripers.

You’ll need a current fishing license to fish in Georgia’s public waters.  Where can you get a license? Buy it online or find a list of retail license vendors at