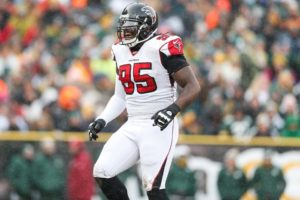 Not all Falcons can fly over the highest buildings in Atlanta, but some can. ~~ Photo courtesy of AtlantaFalcons.com

Some Falcons can fly on the ground, but only peregrine falcons can soar over Atlanta’s skyline.

The Georgia Department of Natural Resources camera is streaming live video of a pair of peregrine falcons nesting atop SunTrust Plaza Tower.

Although the adults switched nest sites this spring, delaying the project, viewers can now watch as the raptors start a new family more than 50 stories above downtown Atlanta.

DNR’s Wildlife Resources Division and project partners provide the video free of advertisements at www.georgiawildlife.com/FalconCam.  The video stream is available, as well, on Ustream (www.ustream.tv/georgiawildlife), which includes ads but also features a chat option.

Jim Ozier, program manager with Wildlife Resources’ Nongame Conservation Section, said the nest cam provides a fascinating opportunity for people worldwide to observe firsthand the “private nesting life of these iconic birds,” which have been re-established to their former range in the eastern U.S. after having been extirpated by the widespread use of DDT.

Peregrines have been nesting on balconies at SunTrust Plaza Tower since 1997.

Jeff Haidet is chairman of McKenna Long & Aldridge, an international law firm with offices overlooking the nest sites.  “Despite the fact that these urban falcons and their offspring face formidable odds, they survive and thrive,” Haidet said. “It’s a fascinating process to observe, and we’re always pleased to help support the DNR’s mission to bring the falcon nesting experience to the public.”

A streaming camera added in 2013 and other upgrades were provided through a grant from The Environmental Resources Network (TERN), friends group of the Nongame Conservation Section, and key support from McKenna Long & Aldridge. The Garden Club of Georgia Inc. is also a project partner. HDOnTap provides streaming services.

Live-streaming wildlife is always a challenge, and this nesting season is no different. The falcons are nesting in a planter opposite where the camera was first set up. DNR has moved the camera but will be streaming temporarily from inside the building to avoid disturbing the birds during this sensitive part of the nesting cycle. While the arrangement affects the view and does not allow for audio, it still provides a unique window into the world of possibly the fastest animals on Earth.

Peregrines have been clocked “stooping,” or diving, on pigeons, ducks and other birds in flight at more than 200 mph!

These built-for-speed raptors were removed from the federal list of threatened and endangered species because of a successful population recovery effort. Yet the birds are still state-listed as rare in Georgia.

What’s not so rare now is seeing up-close what nest life is like for one pair of Atlanta falcons.

Help conserve peregrines and other nongame wildlife, native plants and natural habitats through buying or renewing an eagle or hummingbird license plate, or contributing directly to the Georgia Nongame Wildlife Conservation Fund. Both support DNR’s Nongame Conservation Section, which receives no state funds for its mission to conserve native wildlife not hunted, fished for, trapped or collected.

Please note: Although the video stream is available in HD, the quality viewers see is determined by their Internet connection speeds.