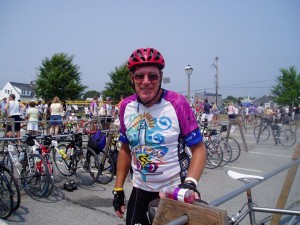 Bill Finan is a Road Warrior in the Pan-Mass Challenge to raise money for cancer research.

When — not if — researchers at Boston’s Dana-Farber Cancer Institute find a cure for cancer, Bill Finan won’t get any media coverage for his contributions, year-after-year, helping to eradicate that dastardly disease.  That’s the way Bill wants it to be.

Bill Finan is “just another guy” who rides in the Pan-Mass Challenge (PMC) with almost 6,000 other bicyclists from roughly 40 states to raise money to fight cancer.

In a few words, here’s how PMC describes itself:

Each year the Pan-Mass Challenge brings together thousands of impassioned cyclists, committed volunteers, generous donors and dedicated corporate sponsors. Together, we strive to provide Dana-Farber’s doctors and researchers the necessary resources to discover cures for all types of cancer.

My friend Bill isn’t their leader, but he’s one of their most ardent cheerleaders.  He lives and breathes raising support for his annual ride.  In his own words:

All of my life, I have been hoping to find a way to combine leisure time activity with a meaningful endeavor. Since I’ve been associated with and riding in the Pan-Mass Challenge, I wake up every morning knowing I am contributing to an event that literally saves people’s lives.

The money raised by the PMC funds cancer research and treatment via the Jimmy Fund at the world-renowned Dana-Farber Cancer Institute in Boston. I am particularly proud that last year, the PMC’s annual gift to the Jimmy Fund was an incredible $41 million.

For the eighth consecutive year, the PMC has achieved the previously thought-to-be-unreachable benchmark of donating 100% of every rider raised dollar – that’s the money that comes from you – directly to cancer treatment & research at Dana-Farber.

The New York Times ran a story on July 20, 2015 about a different group that sought donations, supposedly to fund cancer research.  That organization is under investigation for fraud, as The Times stated, “the foundation had paid exorbitant fees for telemarketing and direct-mail fund-raising campaigns — more than 80 percent of the $9.7 million that the charity collected from mid-2009 to mid-2013. It paid out only $57,451 in “direct cash assistance to leukemia patients” in that time.” 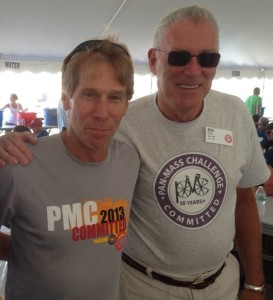 PMC funding is totally different from that.  All the money Bill Finan raises to support his PMC ride goes “directly to cancer treatment & research at Dana-Farber.”

Bill recently purchased a fancy chain for his bike, then he sprang for Michelin racing tires.  Wanna know how much of the money he raises for support helped pay those expenses?  Zero.  Nada.  Zip.  Nothing.

He and his wonderful wife Gail — who has worked behind the scenes helping PMC for 15 years — used their own money.

When Bill signs up, he agrees to let PMC charge his credit card for the entire amount he pledges.  If nobody helps support his race, he pays it all.  Thankfully, that hasn’t happened in the 15 years Bill has ridden in the PMC.  In fact, Bill is what called a Heavy Hitter, someone who is recognized as an extraordinary fundraiser.  Bill’s reward?  For earning the Heavy Hitter designation, he gets to buy a ticket (with his own money) to attend the Heavy Hitter banquet. 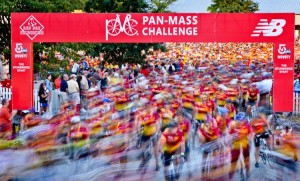 Who gives Bill money?  One cheapskate, penny-pinching, starving artist we all know put $100 toward Bill’s $7,200 Heavy Hitter goal for 2015.  Partly because I know and respect Bill and partly because of how Gail was treated at Dana-Farber Cancer Institute when she began — and won — her fight with cancer.  I understood, first-hand, that I helped pay for her treatment, as did all of Bill’s supporters.

The 36th PMC ride begins on August 1st.  Since 1980, PMC has raised $455 MILLION to fight cancer.  My guess is they’d like to make that number an even Half-Billion Dollars by the end of this year’s ride.

The route Bill has chosen is a two-day ride from Sturbridge to Provincetown, although he could have chosen a shorter route. 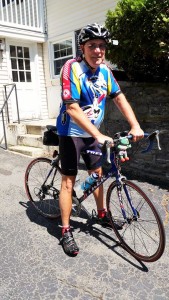 Some of his family and friends hoped Bill would slow down this year.  Many of us would have understood if he didn’t ride this year.  Why?

The course was cold and wet last year.  Miserable weather.  Bill rode anyway.  Somewhere along the trail, something happened and Bill took a heck of a tumble.  When he awoke in the hospital with a concussion, he was pretty well banged up.  Took him a while to recuperate.

Bill Finan is 70-years-old.  Microsoft’s Bill Gates doesn’t go to sleep sobbing because Bill & Gail have more money.  Our Bill could rest his weary bones at any number of beaches this August.  He doesn’t need to exercise and train all year long, but that’s what he does to fight cancer.  And he’s going to ride the PMC … at least one more time.

Bill isn’t desperate for your money or your support.  No cute little puppies are going to die if you don’t send PMC money for Bill’s ride.  No one is going to starve.  Sarah McLachlan isn’t going to come to your door and cuss you out.  You don’t have to feel guilty if you don’t pop him a few bucks.  But if you do share some money to fight the battle … everything you invest will be used to fight cancer.

Nothing goes to personally benefit Bill or anybody else at PMC.

Lot’s of you have asked about Gail & me. We’re fine! Gail is doing great and preparing for her 15th year as a PMC Volunteer and I’ve been training hard for my 15th 192-mile bike ride across Massachusetts this August with the expectation of reaching/exceeding our 2015 goal of $45 million which will bring the PMC’s 36-year grand total of giving to Dana-Farber to $500,000,000…that’s right ,1/2-a-$Billion!

How much money would you guess you’re going to simply waste in the next week or two?  $20?  $250?  On behalf of Bill Finan, PMC and the Dana-Farber Cancer Institute, would you consider putting a bit of that money to fight cancer instead?  Please.

The Value of PMC Donations to the Dana Farber Cancer Institute