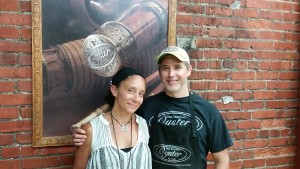 It’s easy to tell people we meet, “Oh! It’s great to get to know you!”  But it might not be a big deal. That can be a nice thing to say before we go our separate ways and never think of them ever again.

Until you meet Bill and Shannen.  They live, work and love one another in a dandy little shop in the dandy little town of Blue Ridge, Georgia.

I met them recently.  It was great … and I have thought about them ever since.

We all have stories with a beginning or two.  There are current events and seemingly predictable futures we might share with strangers to make small talk. This particular couple’s past, present and hopes are memorable.

Allow me to introduce you to them, please.

The Tale of Two Oysters and the Pearls They Produce

Theirs is a love story, replete with tragedy, the defeat of seemingly impossible obstacles, triumphs over adversity and joyful endurance.

Their story is the stuff of fairy tales.  I love it.

The Sand in the Gland 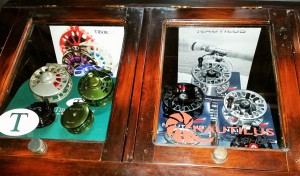 Ever had something fly into your eye?  It’s aggravating.  Trying to remove it can cause damage to a sensitive gland.

Pearls, as you may know, develop when a fleck of sand aggravates the glands of an oyster.

As the oyster grows in size, its shell must also grow. The mantle is an organ that produces the oyster’s shell, using minerals from the oyster’s food. The material created by the mantle is called nacre. Nacre lines the inside of the shell.

The formation of a natural pearl begins when a foreign substance slips into the oyster between the mantle and the shell, which irritate­s the mantle. It’s kind of like the oyster getting a splinter. The oyster’s natural reaction is to cover up that irritant to protect itself. The man­tle covers the irritant with layers of the same nacre substance that is used to create the shell. This eventually forms a pearl.

Back in the early 1990s, Bill lived in Athens, GA.  He was a professional bicycle racer in pursuit of a place on the American Olympic team in 1996.

He had the skills, talent and perseverance to attain that lofty goal … until a piece of sand embedded itself in the eye of Bill’s hopes and dreams.

Shannen described it to me as a wreck on a mountain bike that “broke the left side of [Bill’s] body.”

Gone were the dreams of Olympic competition and the quest for gold in a sport and career where Bill sacrificially invested so much of his life.

There was no yellow brick road back to racing bikes.

The Pearl Begins to Form

Bill’s therapy for unbreaking the left side of his body included physical movement and relaxation.  To heal, Bill began fishing with a fly rod.  The pearl in Mister Oyster began to form. 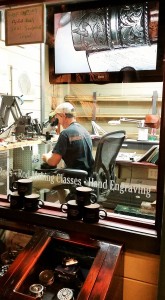 Fly fishing, according to Wikipedia, is

an angling method in which an artificial “fly” is used to catch fish. The fly is casted using a fly rod, reel, and specialized weighted line. Casting a nearly weightless fly or “lure” requires casting techniques significantly different from other forms of casting.

Fly fishing is an art.  For some gentlemen, it is perceived as a skill that cannot be purchased, inherited, granted by dignitaries or won by lottery.  Man against bamboo … and wily fish.

Bill taught himself to fly fish.  After that, he used the same tenacity to delve into the art of creating bamboo fly rods.  Fly rods can be prohibitively expensive.

Bill decided to make his own.  His skills flourished in what Shannen calls “a guarded art,” one where the secrets of the trade were not shared openly or freely.

That was then, this is now.

Stories of olden trials are so common our eyes roll when we hear one coming.  Losers define themselves by ancient defeats and writhe in the self-inflicted pain of self-pity, a worse fate than most troubles.

Others shake them off, wave goodbye to the past and trek into the future.  The path taken by The Oysters.

How much of his previous travails did Bill regale in our time together?  None, until someone else broached the subject.  Bill quickly reentered the present, with an eye on the future.

Today, Bill is renowned for creating some of the most magnificent pearls of fishing: the Oyster Bamboo Fly Rod.

Even that wasn’t enough for Bill.  So, he became a student of elaborate engraving, to especially personalize his finest work.

My dad used to tell me “if you have to ask how much something costs, you can’t afford it.”  That’s the truth, in lieu of the trap of credit, but I asked anyway.  How much are Bill’s works of art?

Right.  You and I cannot afford them.

Bill Oyster has a Plan B for those who desire an exquisitely functional fly rod: allow him to teach you to make your own!

Classes are held at their shop in truly beautiful Blue Ridge, Georgia.  Need a place to stay nearby?  How about upstairs from their intriguing shop.  Wondering where to test your gear?  Guides to world-class trout streams are on call.

How popular are these six-day Make Your Own Rod workshops?  As of June 2015, the next openings are in eight months; April of 2016 is full, and May has three spots left.

The Risk of Visiting the Oysters

Visit Bill and Shannen at your own risk.  Not only might you find a new hobby or art, you might not even go home again.

If you don’t believe me, just ask the shop manager at Oyster Fine Bamboo Fly Rods.  He was like you, once upon a time. 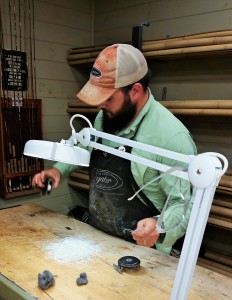 Riley Gudakunst and his dad traveled from Michigan in 2009 to learn from the Oysters and study a new craft.  Blue Ridge has been Riley’s home ever since.

He didn’t just drink the Oyster Kool-Aid, he mixes batches for new generations of followers who, like him, took a simple sip and got hooked on making fly rods.  The best fly rods.  Works of art that work artfully.

Lessons from The Oysters

Shannen Oyster’s passion for their venture is only matched by Bill’s artistry.  They began the business “to be together.”

Their love for one another and their passion for their mutual mission is a lustrous pearl best appreciated in person.

Watch them work.  Delight yourself in their passion. 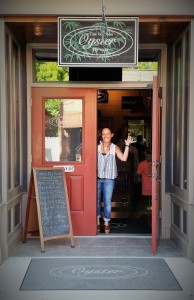 Listen to Shannen preach about how your personal path to expressing your art, no matter the obstacles, is “do able!”  Please don’t let your eyes roll as she encourages artists to do what they love, trusting the money will follow.  As it did for them.

The tasteful brochures used to reel customers in to Oyster Fine Bamboo Fly Rods have quotes from world leaders and references to former presidents who own Oyster rods.  Very impressive, indeed.

Another quote comes to mind, one from King Solomon, the most wise man ever:

“Do you see a man who is skilled in his work?  He will stand before kings, he will not stand before obscure men.”

Enjoy meeting the Oysters and take home one of their pearls.

Or simply be inspired to tackle your own dreams and see where life and hard work will take you, if you can make lemonade out of life’s lemons or pearls out of broken bones.

Just don’t be surprised if you don’t make it home in time for dinner … or Christmas.