Gov. Nathan Deal signed House Bill 673 into law.  As of July 1, 2018, drivers in Georgia will have new restrictions on the use of electronic devices while driving.  New penalties are also in place to fight the epidemic of distracted driving and texting while driving.

We’re thankful to Sgt. Jake Smith of the Gwinnett County Police Department for the press release with the details about this important news to drivers about texting while driving in Georgia.

Drivers should be aware that under the new law they will no longer be permitted to physically hold a phone, GPS navigation device, media player, tablet, computer or other electronic device while operating any vehicle.

The law also prohibits reading or writing text messages; recording or playing videos, with the exception of hands-free devices, such as dash cameras that record continuously; and sending or receiving internet data.

Texting while driving will be illegal in Georgia as of July 1, 2018.

Drivers will still be allowed to talk on the phone or use voice-to-text technology if done through an earpiece, headset, smart watch, or other hands-free device.  Phones and other devices may also be used for navigation, so long as they are mounted and used in a hands-free manner. 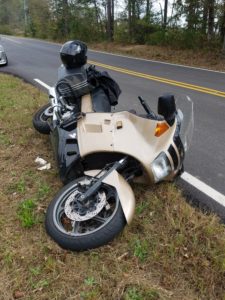 Those who violate this law will be cited and will face a fine of $50 and 1 point on their driver’s history for a first offense; a fine of $100 and 2 points for a second offense, and a $150 fine and 3 points for a third offense.

The law allows a one-time “pass” on a driver’s first offense if the driver appears in court with proof of having purchased a hands-free device.

The Gwinnett County Police Department and Gwinnett County Solicitor’s Office will begin enforcing and prosecuting violations of this new law after a grace period of 90 days in an effort to reduce the risk distracted driving poses to Gwinnett County residents’ lives and property.