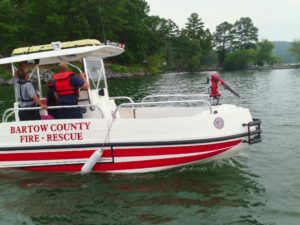 LakeAllatoona.com is grateful for this preliminary boating information report from Rick Lavender of the Georgia Department of Natural Resources.

This report contains statewide statistics and has specific totals for incidents on Lake Allatoona over the Labor Day holiday weekend, August 31-September 2, 2013.

There were three deaths on public waters in Georgia. Two are considered boating-related fatalities.

Overviews and specifics were also provided by Officer Lavender.

Statewide, there were four other boating incidents. Two involved personal watercraft, and one included injuries (minor).

A 23-year-old Atlanta man died Sunday after jumping off a boat near the Red Top Mountain State Park swim beach, according to the DNR Law Enforcement Division. Nicholas Alexander was with a group of family on a rental boat near the rock jetty, about 75 feet from shore, when he jumped in at about 5 p.m.  He seemed at first to be OK, then began to struggle and went under. Two people on shore tried unsuccessfully to reach him. His body was recovered at 6:18 p.m. Sunday in about 30 feet of water. The search and recovery included DNR, Bartow County Fire/EMA and the U.S. Army Corps of Engineers.

The body of an Atlanta man who died Sunday afternoon in Amicalola Creek near Dawsonville was recovered at 12:53 p.m. Monday, according to the DNR Law Enforcement Division. Ramiro Ponce-Ruiz, 45, was swimming with family and friends at Devil’s Elbow on Dawson Forest Wildlife Management Area when witnesses said he swam into the pool, dove, came back up and began to struggle. A diver with the Dawson County dive team found his body, ending a search that began Sunday. The recovery included DNR, the Dawson County Sheriff’s Office and Fire Department, Dawson’s dive team, and Cherokee County divers. Hall County Sheriff’s Office divers were preparing to help Monday.

The body of a 61-year-old man who went missing Saturday afternoon on the Savannah River near Augusta was recovered at about 9:30 a.m. Sunday in the river, according to the DNR Law Enforcement Division. Ralph Edward Taylor of Augusta was paddling in a kayak with two companions, also in kayaks. The two went around the side of an island where the rapids were more challenging. Taylor went down the other side. The companions later spotted his empty kayak. A Richmond County Water Rescue dive team member found his body in the water the next morning. The investigation is continuing. The search included DNR and the Richmond County Sheriff’s Office and Fire Department.