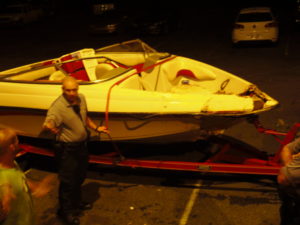 Vessel involved in boating incident on Lake Allatoona on 8-3-13.

DNR Ranger Mike Barr tells LakeAllatoona.com that an emergency 911 call was received on Saturday, August 3, 2013, at 7:38 PM about a boat crash on Lake Allatoona.  The incident happened on Little River, west of Allatoona’s Little River Marina.

An 18-foot Crownline pleasure boat ran into trees on a 15-foot portion of the river’s bank and was sinking.

The boat’s throttle was found in the full forward position indicating the boat was at full power.

Rescuers found two badly injured men aboard, one of whom was trapped in the driver’s seat and had to be cut free.

Both men — whose names have not been released — were transported by Cherokee EMS to Kennestone Hospital with serious but non-life-threatening injuries.

The DNR Critical Incident Reconstruction Team is investigating the crash.