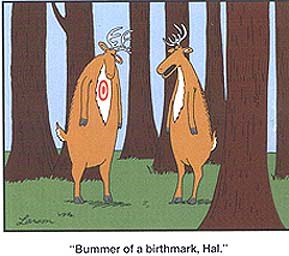 Far Side Cartoon by Gary Larson

We’re well into football season and the World Series isn’t far away.  That, of course, means the wait is almost over as firearms deer hunting season begins Saturday, October 19, 2013.

“Regulated hunting is the most cost effective and efficient means of managing the deer herd,” says John W. Bowers, chief of game management for the Wildlife Resources Division. “In addition, deer hunting provides an economic benefit in excess of $890 million to the state.”

During the 2012-2013 firearms deer season, more than 295,000 licensed deer hunters harvested more than 315,000 deer in Georgia.  Georgia’s deer herd remains a stable and healthy herd with an estimated statewide population of about one million deer.

Beginning this season, the number of firearms either-sex days is reduced in most counties. Biological data indicating a declining statewide trend in the number of fawns that survive into the fall and a steady increase in doe harvest rates informed this science-based decision.  Additionally, these biological trends were echoed in public comments and warranted regulatory changes to reduce the doe harvest.

More than one million acres of public hunting land is available to hunters in Georgia, including more than 100 state-operated wildlife management areas.  In addition to traditional hunts, many special hunts are offered, including ladies-only and adult/child hunts.

Dates and locations for these hunts, as well as WMA maps, are available in the 2013-2014 Georgia Hunting Seasons and Regulations guide By Clicking Here.

To pursue deer in Georgia, hunters must have a valid hunting license, big game license and a current deer harvest record. If hunting on a WMA, a WMA license is required.  Licenses can be purchased online at By Clicking Here, by phone at 1-800-366-2661 or at a license agent.

All deer hunters must wear at least 500 square inches of fluorescent orange above the waist to legally hunt during firearms season except on archery-only areas.