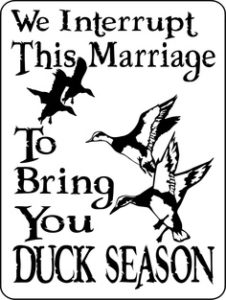 ‘Tis the season to start dreaming up another bulletproof excuse to get out of work for the opening of duck season.

Yes, November 22nd is National Start Your Own Country Day, but other hunters are going to get busted for using that trick, and who’s going to believe you need time to celebrate National Cashew Day on the 23rd?

Stick with an oldie-but-a-goodie and kill off a fake relative out of state.  Hey, it worked for Ferris Bueller.

Blow the dust off your duck call and decoys, and clean your shotgun.  It’s time to go hunting!

Given the amount of rainfall this spring and summer, there should be lots of water and plenty of places to go duck hunting this fall, according to the Georgia Department of Natural Resources’ Wildlife Resources Division.

Regarding the current condition of many of our wetlands, Georgia’s waterfowl biologist, Greg Balkcom, says, “This year is the complete opposite of last year in terms of water conditions.  This year we have plenty of water, and many of our isolated wetlands are full and ready to support ducks throughout the winter.”

An additional benefit of all the rain in the early spring was the increased brood-rearing habitat for locally breeding wood ducks.  According to duck banding data from this summer, wood duck production is up and duckling survival seems to be good this year.

Natural duck food plants should be in abundance given the wet conditions during the growing season here in Georgia, and U. S. Fish and Wildlife Service waterfowl population surveys across the northern U. S. and Canada indicate a healthy waterfowl population, so this duck hunting season has the potential to be a memorable year.

Hunting season for ducks is