North Atlantic right whales are rare and imperiled.  Right whales swim from Canada and New England each year to bear their young in the Southeast’s warmer waters.  They commonly give birth off the coasts of Georgia, Florida and South Carolina.

That’s about average … which is great.  Last year only seven calves were born.

Clay George heads right whale research for the Georgia Department of Natural Resources.  He says the population is increasing at an estimated 2 percent per year.  Although calf production can vary widely year to year, a string of poor calving seasons could reverse the upward trend.

There are only about 450 North Atlantic right whales left and fewer than 100 breeding females. 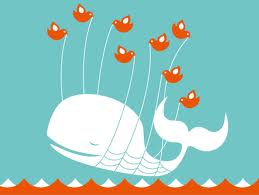 Evidently wrong whales are not counted at all.  Serves them right.

According to George, a wildlife biologist with the DNR Wildlife Resources Division’s Nongame Conservation Section, “It was another average season, which is just what we needed after such a poor showing last season.”

DNR’s Nongame Conservation and Law Enforcement sections team up with other groups to:

Right whales can weigh up to 70 tons and reach 50 feet in length, yet they often swim and rest just below the surface, making them difficult to spot by oncoming watercraft.

Large vessels face speed limits in right whale areas along the U.S. Atlantic coast.  Speed restrictions appear to be reducing the right whale vessel strikes, but more time is needed to know for sure.   George said there is also a growing emphasis on educating recreational boaters to slow down during the right whale season – for their safety and for the whales.

Researchers from Sea to Shore Alliance, NOAA and Florida Fish and Wildlife conduct aerial surveys along the South Carolina, Georgia and Florida coast during the cooler months.

The goal is to monitor the right whale population and reduce the risk of vessel collisions, a common cause of right whale mortality.

The season’s last flight off South Carolina was April 15.

So far, six of the mom/calf pairs seen this winter in the Southeast have been documented in Cape Cod Bay, Massachusetts, according to researchers with the Provincetown Center for Coastal Studies.  Cape Cod Bay is a key feeding habitat for right whales.

In other news from this season:

There have been no verified reports of right whale sightings in Lake Allatoona.

DNR’s right whale work is funded largely by NOAA Fisheries.  But monitoring these and other rare creatures is also an example of how buying a wildlife license plate or donating directly to the Georgia Wildlife Conservation Fund supports wildlife conservation.

Those contributions benefit the Nongame Conservation Section, which receives no state general funds to conserve native Georgia wildlife not hunted or fished for, as well as rare plants and natural habitats.