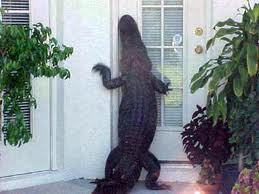 “Whatcha gonna do when gators come for you?”

Are you tough enough to fight an alligator?  One on one?  Bare handed?  Man against beast?

I am, as long as my bare hands are holding a loaded gun capable of blasting through bank vaults.

Before you head out for ammo and new camo, you have to pay the gator tax … or quota hunt permit, as it’s called.

The permit is harder to capture than the most wily prey.

Ten thousand people apply for the 850 permits issued annually for the alligator quota hunt, according to John Bowers,  assistant chief of the Game Management Section. “We anticipate applicant rates to continue increasing for this unique hunting opportunity.”

In Georgia, alligators typically live in a variety of natural wetland habitats including marshes, swamps, rivers, farm ponds and lakes, south of the “fall line” with goes through Columbus, Macon and Augusta.  Gators are “opportunistic carnivores” that eat small mammals, aquatic insects, crayfish, frogs, fish, turtles, water birds and morons who try to pet them.

Your application must be made before midnight on Wednesday, July 31, 2013.