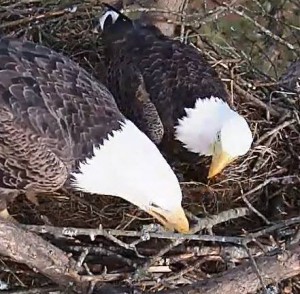 The bald eagle is a majestic bird that is worthy of being America’s national animal and one of the iconic symbols of our great nation.

If you’ve never seen one yourself, you will appreciate the opportunity to do so via a live-streamed video of bald eagles courtesy of the Department of Natural Resources, Berry College and the DNR Wildlife Resources Division.

This streaming video of two bald eagles nesting near Berry’s athletic and recreation center is inspiring.

The nest, first documented in 2012, has been a hit since Berry began streaming it during winter 2013.  Two eaglets took their celebrated first flights from the nest that spring.  This year, the school added a camera that provides a high-definition view into the nest built high in a pine tree.

DNR Nongame Conservation Section Program Manager Jim Ozier, head of bald eagle monitoring in Georgia, said the agency had been looking for an opportunity to live-stream an eagle nest. Berry’s cams answer that need, providing an entertaining and educational look at these iconic raptors.

“It allows people an up-close look at nest maintenance and parental behavior – activities normally seen only from afar, if at all,” Ozier said.

Jeanne Mathews, assistant vice president of Public Relations and Marketing at Berry, said the school “very much appreciates the assistance of Sony, Georgia Power and Fluid Mesh Networks for helping us make this opportunity possible.”

“We hope our viewers will enjoy this unique and exciting chance to watch bald eagles 24 hours a day.”

Egg watch 2014 is on as viewers wait for the pair’s first egg. Ozier said laying can stretch into January, though eagles do not produce eggs every year.

Once common in Georgia, bald eagles declined during the mid-20th century. By the early 1970s, there were no known nests in the state.

But, populations rebounded here and elsewhere, helped by a 1972 U.S. ban on use of the insecticide DDT, habitat improvements through federal Clean Water and Clean Air acts, protection under the Endangered Species Act, greater public awareness, and restoration of local populations through release programs. While still protected by federal and state law, bald eagles were taken off the federal threatened and endangered species list in 2007.

This week, Ozier began aerial monitoring of known nest territories, while also searching out new ones. The public is encouraged to report eagle nests, at www.georgiawildlife.com/conservation/eaglenest or by phone, (478) 994-1438. These reports often lead to documentation of nests not already monitored.

Berry is an independent liberal arts college founded in 1902 near Rome. The nationally recognized school has about 2,100 students. The campus, at 27,000 acres, is one of the world’s largest. Read more about the Berry eagles, and even watch streaming video by approach cam, at www.berry.edu/eaglecam.

The Nongame Conservation Section is charged with conserving eagles and other Georgia wildlife not legally hunted or fished for, as well as native plants and natural habitats. But the agency does not receive state appropriations for this work. Instead, the agency depends on grants, direct contributions and fundraisers such as the Wildlife Conservation Fund state income tax checkoff and sales and renewals of bald eagle and hummingbird license plates.

Bald Eagles at a Glance

Berry is an independent liberal arts college founded in 1902 near Rome. The nationally recognized school has about 2,100 students. The campus, at 27,000 acres, is one of the world’s largest. Read more about the Berry eagles, and even watch streaming video by approach cam, at www.berry.edu/eaglecam.