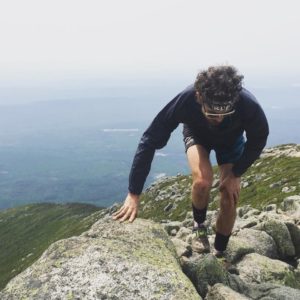 Ultrarunner and ultra vegan Scott Jurek and his wife Jenny hope to start a family soon.  Before the fun begins, Scott wanted to cross one item off his bucket list.  Run the entire dang length of the Appalachian Trail from Springer Mountain (a few hills north of Lake Allatoona) all the way to the highest mountain in Maine, which is often called “Mount Katahdin,” in Baxter State Park.

In case you’re wondering about jogging in Scott’s footsteps, that 2,189.2 miles along the AT’s PUDs — pointless ups and downs on the Trail — equals climbing Mt. Everest 18 times.

Accomplished thru-hikers say they can average 20-miles a day for months.  That pace would get you from end-to-end in roughly 110 days, or four months.  Not counting “zero days” when your body revolts and says “No more, you idiot!”

“Nero days” also add to the total.  They usually occur when one smelly hiker says to a stinky and/or lonely hiker, “Hey, baby! Come here often?” and the frantic trek slows. 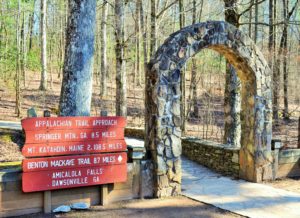 Scott hit the Appalachian Trail from the southern terminus near Amicalola Falls State Park on May 27th at 5:56 AM.  He hoped to run all the way to the northern end of the Trail in 43 days.  One of his goals was to beat the previous “record” for speed hiking the AT, set by Jennifer Pharr Davis.

Purists will insist that Jennifer Pharr Davis — the previous record holder for the fastest assisted hike — did not run the Appalachian Trail.  She merely got up early every day and, with assistance from her team, walked all day and into the evening.

Most of us couldn’t walk around an air-conditioned indoor track that far that fast. 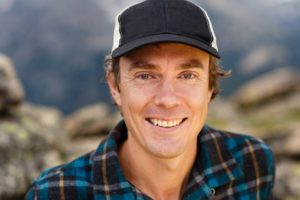 Scott wrenched his right knee and skronked his left quadrasomething while jogging the Trail somewhere in the Smoky Mountains.  That slowed him down.  You or I would probably still be on crutches and whining for more Diet Dr Pepper and Cheetos.

Remember, Scott is not merely a person who doesn’t eat food that ever had eyes, he’s a vegan’s vegan.  All his food is plant-based.  I am not sure how beer fits in there … but it does.

Toward the end, 50-mile days weren’t enough to guarantee he’d hit the tippy-top of Katahdin in time.  He slept less — sometimes only an hour or two a night — and ran more.  Beating his already slim stature and losing 20-pounds along the way.

He never gave up running to finish the Trail faster than a lady who walked all the way.

The doubts among Scott’s team weren’t make public, but there were many.

The End of the Trail 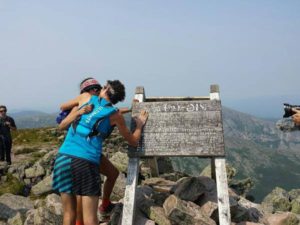 With thousands of Trail-happy followers watching his progress online — thanks to a nifty Delorme tracking device he wore — Scott hustled up Maine’s highest hill and kissed the sign on top just after 2 PM on Sunday, July 12, 2015.

Scott made the entire trip in 1,112 hours and change.  He averaged a fraction under two miles per hour running the Trail.

Scott Jurek is one of the world’s most famous insanely-long-distance and endurance runners.

This jaunt was almost beyond his crazy skills.  No doubt others are planning to “beat his record.”

What will they lack that helped Scott reach victory?  Jenny, Scott’s wife, and his amazing team.  Great victories are won by great teams.

Reflections on the Feats of Scott Jurek & Jennifer Pharr Davis

at 2 PM on Sunday, July 12, 2015, when he set the new fastest known time for thru-hiking the Appalachian Trail.

Writers commenting on Scott the Ultrarunner’s victory are reaching new levels of irrational exuberance.  Many are writing that Scott “shattered” the previous record, set by Jennifer Pharr Davis in 2011.

As amazing as Scott is, was or ever might be … he did not shatter Jennifer’s record.  He beat it.

Scott hiked seven or eight additional miles than Jennifer.  He won the race, if there was one.

I Hate Math But Let’s Do It Anyway 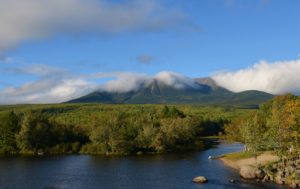 Scott summited the highest peak in Maine three hours faster than Jennifer’s time of 1,115 hours or so in 2011.

Scott’s time (correct me if I am wrong, Math Majors) was 27-thousands of a percent quicker than Jennifer’s.

Doesn’t mean Scott didn’t win.  It does mean he didn’t come anywhere near “shattering” anything but his body trying to run the length of the Appalachian Trail.

To me, the body-crunching sacrifices that Scott and his team endured and overcame by running the whole dang Appalachian Trail could hardly be overestimated.  Scott ran all day … and many nights … to earn his place in AT history.  No doubt.  No exceptions.

The dad and grampa in me prefer Jennifer’s accomplishment.  My professional writer side is still celebrating for Scott and his team.

Jennifer Pharr Davis earned the previous honor by getting up early each day, walking all day and into the evening, and getting up to do it all over again the next day.  Jennifer’s endurance and her amazing team, including her husband Brew, earned their place in history too. 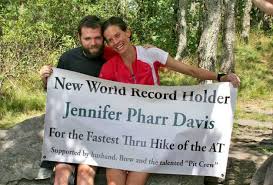 Pardon me for forgetting the source of this quote, but a fellow on Scott’s team said something like, “The Trail kicked our butts all the way.”

The Trail does that.  Starting with the insane stairs to the Approach Trail to Springer, or the insane climb to the top of Katahdin to begin a southbound hike.

In my mind and heart, Scott did not break or shatter Jennifer’s record.  He simply set a new mark.  One that young Trail Slingers are strapping on their packs to beat as you read this.

Cheers to the spouses of our heroes of the Trail: Brew and Jenny.  You’re the ones I want to thank.

I loved what Jennifer says about all this.  Read it here.

Hike your own hike.  Go at your own pace.  Don’t freak out if somebody hikes it differently or if someone tells you to hike differently.

Hit the Trail and hike it any way you’d like, even you’re only a legend in your mind and mine.