Ornithologists are bird-brained explorers who arise before dawn to trek into swamps and climb cliffs to find majestic winged creations to add to their life lists.  You, however, are invited to come spy an osprey at Lake Allatoona on your schedule.  We’ll even tell you where to look. 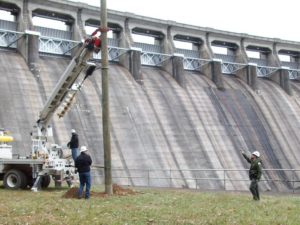 No, I’m not a “birder,” but I’d like to know more about birds.  Sure, I know the call of the pileated woodpecker and barred owls in my back yard.  Yes, they’re both delightful.  It’s a wondrous hobby that you can practice just about everywhere you go.

We’re grateful for our pals at the U.S. Army Corps of Engineers (USACE) at Lake Allatoona for their work for more than 20 years to supply safe habitats for ospreys.  USACE has worked with Georgia Power to place tall poles where osprey can build nests and breed in peace.

The USACE Facebook page for Lake Allatoona offers information on “the Allatoona Osprey Platform Program.”  Their teamwork with Georgia Power is inspiring to bird lovers.

Georgia Power donates the poles and provides the workers and machinery to install the poles into the ground. The Corps provides the locations, builds the platforms and then maintains the poles once installed. The platforms provide a much safer and easier location for Osprey to build their nests. 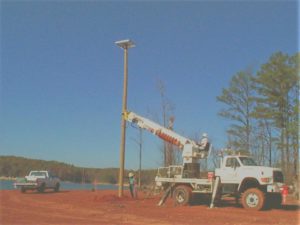 Beginning birders might confuse osprey with bald eagles because they are both large and have partially white heads.  After a few sightings, you’ll easily tell them apart.

Bald eagles are less common, bigger and are less often seen diving for fish.  The osprey, after all, is found worldwide.  It’s also called a fish hawk or a river hawk because its diet is almost exclusively fish.

After seeing many bald eagles and osprey, each encounter is thrilling in its own way.  Come spy an osprey at Lake Allatoona and catch a cheap thrill for yourself.